You are here:
drone operationUAVs 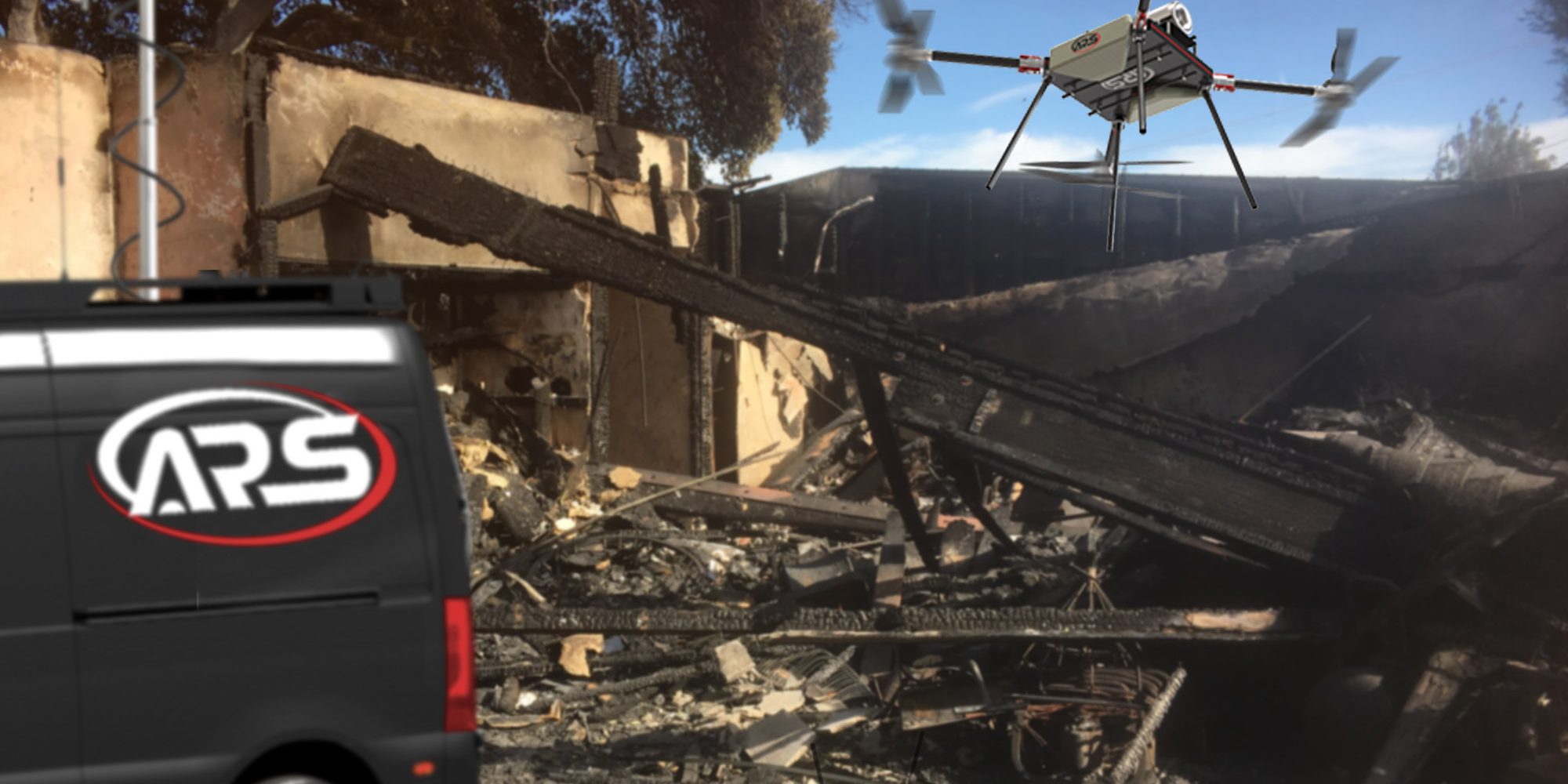 It is imperative for any business to revisit theories and test past assumptions on a regular basis. As ARS ventures into new territory with the launch of its own long-range hybrid drone this fall, it also seems like an appropriate time to revisit the first ARS UAS product, the mobile ground station.

Since ARS was founded, the number of operations of unmanned aircraft (UA) and unmanned aircraft systems (UAS) that are conducted in the United States National Airspace System (NAS) for both private and enterprise uses have continued to expand exponentially. However, many of the commercially available systems for controlling and operating UAS are still limited in their functionality to conduct flight operations safely and effectively for the purpose of identifying, measuring, and quantifying airborne hazardous materials (HAZMAT). The effective first response to an incident involving HAZMAT is critical to minimizing the long-term impacts of incidents in terms of public health, responder safety, and environmental degradation.

When we began the design of the first UAS C2 vehicle, we initiated the process on the basis of several test cases. One of these cases involved Hurricane Harvey. In August of 2017 when Harvey, a category 4 hurricane, made land fall in Texas and Louisiana, among the impacts of this devasting storm were catastrophic rainfall-triggered flooding. Due to Harvey’s storm surge, it is estimated that between 2.2 million and 4.6 million pounds of airborne emissions (exceeding state limits) were released from 46 facilities across 13 counties. Included in the releases were pollutants such as benzene, butadiene, and other petroleum-based compounds.

These chemical compounds are also referred to as Toxic Inhalation Hazards (TIH) or Poison Inhalation Hazards (PIH) in the Emergency Response Guidebook. Most of the air monitoring in this specific case was conducted through high altitude flyovers which were conducted days and weeks after the storm. Additionally, ground-based sensors were not operational immediately following the storms landfall due to flooding. Exacerbating the issues of response and communication coordination among first responders was the fact that wireless networks along the Texas coast suffered outages as a result of the Hurricane. The confluence of events left residents and responders without actionable intelligence during the most critical time period immediately after the storm’s landfall.

What these counties and first responders were lacking was a system to safely: conduct low-altitude and site-specific readings of airborne HAZMAT, visual reconnaissance of suspected incident sites, and transmit both streams of data to an incident command system. In order to address this need and others like it, ARS/ENG has developed a mobile UAS ground control station (GCS) and long-range UA, whereby it controls UAS without the need for cellular networks through an independent radio and antenna system utilizing multiple-in, multiple-out (MIMO) technology. The unique integration of existing and new technologies improves the performance of these systems and allows pilots/operators the ability to conduct flight operations at a protective distance from toxic airborne releases. Further, it provides the ability to gather site-specific and low-altitude sensor readings, combined with a process for transmitting the UA based video and sensor data to authorities that will enhance real-time decision making. This critical data will improve public and responder safety.

The ARS/ENG UAS C2 vehicles integrate a wide variety of systems that enable specialty UAS to operate on an independent RF network, fly at greater distances, in larger areas of operation, in more congested areas, and improve the flow of data compared to other UAS ground control stations (GCS). This is accomplished through the integration of superior communication links, greater RF line-of-sight prorogation, and redundant power sources.

At the core of the ARS/ENG UAS C2 vehicles is an integrated heavy-duty pneumatic driven and telescoping mast, which reaches a height of 50 feet when fully extended and is rated for a maximum payload capacity of 300 pounds. The mast is combined with a custom-designed mounting platform suitable to support an array of UAS communications equipment. The extended height and available payload of the heavy-duty mast and mast platform, combined with multiple sources of AC/DC power from the vehicle, provides a  superior level of RF signal strength to airborne devices through MIMO radios and high-gain antenna. The collection of integrated hardware serves several functions including the primary and secondary means of UA flight control, UA telemetry, sensor data, video feeds.

Additional mast-mounted equipment includes a 1000mm day/night dual-sensor PTZ camera, which provides an additional means of visual reference and tracking of the UA while improving the separation of the UA from other manned and unmanned aircraft in the area of operation. Secondary transmitters/receivers and antennae on the mast are incorporated to provide communications links between the C2 vehicle operators and air traffic control (via VHF air-band) as well as public agencies (via UHF radios). This facilitates the safe operation and coordination with ATC and incident commanders. Wireless and cellular networks are used (when available) to incorporate aviation-related decision-making information from UAS Service Suppliers, and Supplemental Data Service providers. The availability of broadband connectivity facilitates data transmission from the C2 vehicle to end-users via cloud-based applications.

The specialty long-range UAs are equipped with an off the shelf 2X2 MIMO TX/RX radio and linked to a matching 2X2 MIMO radio and antenna integrated to the C2 vehicle’s mast. A commercially available infrared camera for the detection of gases is mounted to the UAV so that a radiometric thermal camera measures the temperature of a surface by interpreting the intensity of an infrared signal. Utilizing radiometric temperature, calibrated to correlate temperature with a certain level of radiation intensity within the spectral band of 3.2µm – 3.4µm. Capable of capturing images or video, content is stored on an internal micro-storage device and transmitted via the same independent RF system to the C2 vehicle.

RF links are essential to the operation of UAS. There are many external factors that limit the effective signal strength, or radio path loss, of RF devices such as free-space loss, absorption loss, diffraction, multipath, terrain, obstructions, and atmosphere. In terms of the device’s effectiveness in transmitting and receiving RF signals, relevant factors include output power measured in watts (W) or decibel-milliwatts (dBm), frequency (MHz), throughput (Mbps), antenna/cable selection, and antenna height. Through integration and design, the ARS/ENG system reduces the impacts of radio path loss and thereby improves the range, reliability, and throughput of the UAS. These improvements are designed in order to meet the apparent needs of responders engaged in  HAZMAT emergency response, detection, and inspection.

Ground interference and atmospheric conditions will vary within each area of operation. However, assuming ideal conditions, and based on calculations to compare varying conditions of RF propagation we can demonstrate vast improvement in UAS performance and reliability through the ARS/ENG C2 integrated mobile system for the use in HAZMAT response and detection. For instance:

1. There is an improvement in the  RF line-of-sight transmission capabilities used for UA control from a vehicle-based C2 system in terms of Fresnel zone clearance. This is achieved by reducing obstacle clearance and ground interference through antenna height. The general rule of thumb is that the 1st Fresnel zone must be 60% clear of obstruction from the centerline of sight to the outer boundary of the 1st Fresnel zone to maintain a good connection.

2. The integration of the ARS/ENG system allows it to take advantage of the Maximum (EIRP) for unlicensed wireless equipment as mandated by the FCC. EIRP is a measure of radiated power in terms of output power (dBm), cable loss (dB), and antenna gain (dBi). In other words, it is the combination of the power emitted by the transmitter and the ability of the antenna to direct that power in a specific direction. Based on the Formula:

3. There is an improvement in Free Space Path Loss (calculated as the loss in dB between two antennas) and used to help predict antenna strength.  The added antenna gain can be used to compare both systems.

4. There is an improvement in Received Power (measured in dBm) and commonly used to determine signal strength considering output power, gain, and free space path loss.

5.  Considering the benefit of the added TX/RX antenna height, improved line of sight distance and radio horizon service ranges can be calculated given the formulae below.

6. With the added benefit of MIMO technology, power output, antenna gain and antenna height we can show the enhanced operation of the ARS Mobile C2 System to other available single-in, single-out (SISO) GCS in terms of the expected signal strength for a given throughput.

In multiple publications and working papers the FAA has expressed that it’s most salient issues with continuing integration of SAS into the national airspace system(NAS) are:

We continue to believe in and promote the concept that, with the stability and payload capacity of a vehicle-based and mast-mounted systems, we can address the most critical concerns of airspace integration listed above as well as extend the range and reliability of communication links and data processing for the usage of onboard environmental sensors.

Consider again the 2017 incidents of airborne HAZMAT releases caused by Hurricane Harvey. The 2018 Emergency Response Guidebook outlines the recommended initial isolation and protective action distances when responding to incidents involving dangerous goods that are considered toxic by inhalation (TIH) (PIH IN THE US). Currently available UAS technologies have the capabilities to detect, identify, and quantify PIH and transmit HD/IR video feeds from an incident that threatens public safety.

However, in order to provide first responders and incident commanders access to useful sensor data and live video feeds via UAS systems from low altitudes and in urban environments, RF communication links from GCS must be capable of operating beyond the predefined protective action distances. Further, they must maintain the necessary signal strength to safely maintain positive flight control and data transmission throughput.

The ARS/ENG UAS C2 vehicle’s integration is designed to maintain flight control and data transfer while operating beyond the Protective Action Distances required by “large spills” of all of the common PIH agents listed and in the most adverse conditions such as night-time combined with high winds. Comparatively, the Standard GCS can be expected to operate beyond the protective action distances of only 9 of the 35 PIH that the ARS/ENG UAS C2 can expect to exceed. This case is but one example of the improved performance and increased capability provided to commercial operators utilizing a    UAS C2 vehicle such as the type that ARS and ENG are manufacturing. After a thorough review, we believe that this system will continue to remain relevant for years to come.